According to Rails to Penn State, the Oreland branch of the Bellefonte Central RR was built to haul iron ore from Oreland bank on ‘Whipple farm’ to Bellefonte’s iron furnaces. The branch was removed about 1892, when its rails and ties were lifted to build a 1 mile branch into the town of State College. The college was finally growing into something substantial, and the railroad foresaw more potential for traffic in the borough than it did in a modest ore bank.

Here is an approximate map I of the branch I created by overlaying Penn Pilot aerial photos from 1938 with modern map data. It’s a pain! But I think I have the route down pretty well. The location of Oreland bank is shown; it’s now Lion’s Gate apartments, more or less. I have also marked the location of a stone quarry mentioned in the book, which was apparently where Hamilton Square shopping center is now. In the image below, it appears as a depression at the top right. 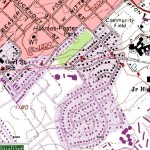 If you know the area, it’s a bit bizarre to visualize an early 4-6-0 steam locomotive moving ore and stone through what’s now shopping centers, apartment complexes, and a high school complex.

If you’d like to experiment with an interactive map of the branch, download this gpx file and upload it to GPSVisualizer.com. You can then view several aerial photo formats, as well as google maps, topos, etc. You can also combine this track with others for the Pine Grove Mills branch, etc.

A survey of historic logging (and other) railroads in central Pennsylvania and beyond.